What started the marriage

For many of us, the same finger ring for man and woman is the sign of marriage.

Marriage is a close bond between two people. Marriage begins with a promise that the two people make at a wedding ceremony. A marriage is never intended for a short period of time and cannot be dissolved again just like that. Anyone who loses their spouse because they die is a widow or widower.

The two partners can only partially choose the rules for a marriage themselves. Most of the time, the state co-determines a part. The religions also have certain rules. There are also rules within the family and within the society in which the couple lives.

In European culture, marriage has been true for hundreds of years: a man connects with a woman, and if possible for life. It is only in the last few years that two men or two women have been able to marry in individual countries. There are also connections that are similar to marriage. They are usually called "registered partnership" or something like that.

A marriage between a man and a woman is called monogamy. This comes from the Greek and means "one-marriage". This is a marriage where you only have one partner. In Judaism, the model for this was the story of Adam and Eve. But not all Jews took this to heart. The kings in particular often had several wives.

Outside of Judaism, one-marriage was rather rare in ancient times. That was probably because many people died early. That is why there were often marriages with multiple partners, polygamy. That means "much marriage". It was only the Romans who supported monogamous marriage.

What Does the Church Say About Marriage? 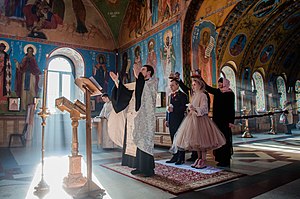 A marriage in a Russian Orthodox Church

In the beginning of the Middle Ages, the Catholic Church made no rules about marriage. Because most people belonged to a count or some other lordship, they needed a permit to marry. But they often didn't get it because they didn't have the money to support a family with children. So they had to stay single.

It was not until the 11th century that the Catholic Church began to make rules for marriage. One such rule was that a marriage was only valid if a priest had sealed it. Another rule was that you could never dissolve a marriage, except through the death of a spouse. One of the Ten Commandments was against adultery. The Church wanted to limit sexuality to procreation in marriage. Priests were not allowed to marry and had to forego sex.

In the Evangelical Church, the Reformed Church and the Orthodox Church, some of these rules no longer applied. There you can also dissolve a marriage, i.e. get a divorce. This should not be done lightly, but only when there is no other way. Reformed pastors and Orthodox priests are also allowed to marry.

What does the state say about marriage?

Most states have laws that regulate what and how a marriage is. These laws vary from state to state. Of course, they only apply to couples who have been married in front of the state, i.e. at the registry office. That has not been possible for so long. In Switzerland, for example, until about two hundred years ago the churches wrote down who was married. Only then did the state take on this task.

The states regulate, for example, from what age one can marry. The state no longer prescribes which surname the spouse should have, but it does allow a certain choice between the original name of the man, the woman or a combination of both. The state also regulates who is responsible for the children, who has to pay how much and what surname they have. Only for a few decades has the state allowed two adults to live together without marriage, have children and thus start a family. Living together without marriage is called cohabitation.

The state also regulates how much taxes a married couple has to pay. That is the money that the state needs for its tasks. In some countries, two people pay more tax when they are married than when they live together without marriage. In addition, the state regulates which pension a widow receives when her husband has died, or vice versa.

The state also has a say in a divorce. If the two partners argue about their property and money, the matter comes before a divorce judge. In the event of a dispute, a judge also regulates who is responsible for the children after the divorce and who has to pay how much for them.

How are marriages in other cultures?

Painting of a wedding in Italy in the 19th century. The man in the middle writes everything down so that you can later prove the marriage in writing. 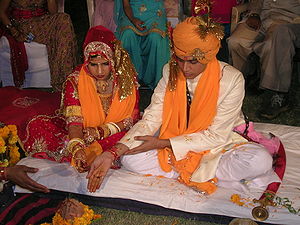 Two Hindus at the wedding

In Islam, too, there is primarily one-marriage. If a man is wealthy enough, he can marry several women and start a household for each. However, one woman cannot be married to more than one man. She needs a male guardian to sign the contract. That's a father or a brother.

If a woman wants the marriage contract to be terminated, she can go to court. In the case of a man, it is sufficient to utter a divorce formula three times. However, these are old rules from the Koran that are not valid in Western and many Muslim countries.

In Hinduism it used to be customary to marry off little girls and provide them with gifts for the household, the dowry. Often the parents even decided whom their son or daughter would later marry. Widows were killed after the husband's death. Today's laws in India allow widows to remarry. Child marriages are also banned, but still occur in poor rural areas.