Before a file can be executed, it must be created. It doesn't matter where the file is created. It is best to do it where it is most likely to be found again. The home directory of the user Pi can be used for this: "/ home / pi". You will find yourself there automatically when you open the terminal or log in via SSH.

What rights is the file created with?

A user script in which commands must be executed with "sudo", i.e. with root rights, does not make that much sense. In such a case, it would be better to create a script with root rights if the script executes commands that require root rights.

For further testing, we create a script file with the "nano" editor:

Or, if the script is to be executed with root rights:

In the editor we enter the following line:

After the script has been created, the question arises of how to execute the script or how to make it executable.

The call for this bash script is as follows:

This command calls the bash interpreter and gives it the file name of the script to be executed. It is important that the file is in the current directory.
The example script then does nothing other than output "Test" on the command line.

The disadvantage of this command is that you have to know and enter the interpreter for the script. Just because the file ends in ".sh" doesn't mean it is a sh script. For this reason, a script is usually made executable, which makes it more time-consuming at first, but simpler later.

As a rule, you don't call a script via a suitable interpreter, but make the file executable.
If the script was created with root rights as the "root" user or as a user with "sudo":

If the script was created with user rights (without sudo):

But "making it executable" is not enough. Because depending on the configuration of the command line, it assumes that it is a bash script by default.

If that doesn't work, then the right "shebang" is missing. This is the first line in the script that indicates the correct interpreter when executed.
The correct "Shebang" depends on the interpreter:

In the following, we assume that our test script is a "bash script". So "#! / Bin / bash" must be in the first line. To do this, we open the script file.

In addition, we add the following in the first line:

After that we can run the script:

"./" causes the file to be executed. The correct interpreter is determined from the first line of the script (shebang).
But just because a "Shebang" is set doesn't mean the file is executable. In order for the "Shebang" to be used, the file must also be made executable (see above).

There are two ways to run a script. Either you execute the script via the interpreter, whereby a "Shebang" contained in the file is ignored.

Or you can make the file executable and set the correct interpreter in the "Shebang".

But just because a "Shebang" is set doesn't mean the file is executable. In order to use the "Shebang", the file must be executable.

You can then run the file. Provided the correct "Shebang" is set, then it works.

Which form of execution you choose, whether with an interpreter or as an executable file and "Shebang", is in principle irrelevant.

Where does it make sense to save your own shell scripts? Linux knows special directories for this.

These and other directories are contained in the global variable "$ PATH" by default. If you create a file in these directories and make it executable, you do not have to specify its directory. It will be recognized automatically.

Here it is important that the script is executable and contains the "Shebang". 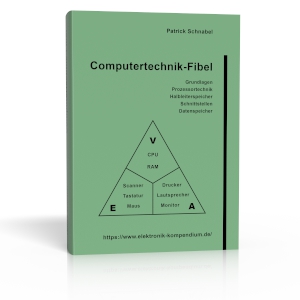 Everything you need to know about computer technology.

The Computertechnik-Primer is a book about the basics of computer science, processors, memories, interfaces and other hardware components.