What would happen if everything would suck

Good to know: That would happen if you opened the aircraft door during the flight

A few days ago a passenger on a flight from Seattle to Beijing tried several times to open the security door of the aircraft. He had already pulled the door handle halfway up when a courageous crew member knocked it down with a wine bottle. All's well that ends well? But what would have happened if the man had succeeded?

According to the FBI, which subsequently tried to reconstruct the course of the scuffle, the Boeing 767 of the airline Delta had already been in the air for an hour and thus at full altitude when the 23-year-old left his seat and was on his way suddenly threw the lever on the right door to the toilet to open it. His motives are so far unclear. The incident at Delta is not an isolated one.

For many air travelers, this scenario is a nightmare, they imagine that someday someone could manage to open the door and then ... yes, what actually? A wind sucking everything that is not riveted and nailed to the outside? Is there suddenly a lack of air or all passengers are shock frozen? Or, probably the worst horror scenario of all: that the sudden negative pressure even leads to a kind of explosion wave?

This happens when there is a sudden drop in pressure

This phenomenon is known as "explosive decompression". Within less than half a second, the external pressure and the pressure inside the cabin are balanced. The interior cools down considerably and the humidity in the cabin. A kind of fog forms. The expansion of air or gases in body cavities could lead to the formation of barotraumas. Pain in the middle ear, the paranasal sinuses, carious teeth can be the result, as well as embolism. Since the oxygen in the cabin is no longer sufficient, the oxygen masks would automatically fall down from the cabin ceiling. The pilot would have to initiate an immediate emergency descent in order to descend to an altitude of 10,000 feet, here the air is breathable again thanks to the higher air pressure. Then one would prepare for an emergency landing. The New Zealand Aeromedical Society estimated 40 to 50 sudden pressure drop emergency situations per year in 2000. 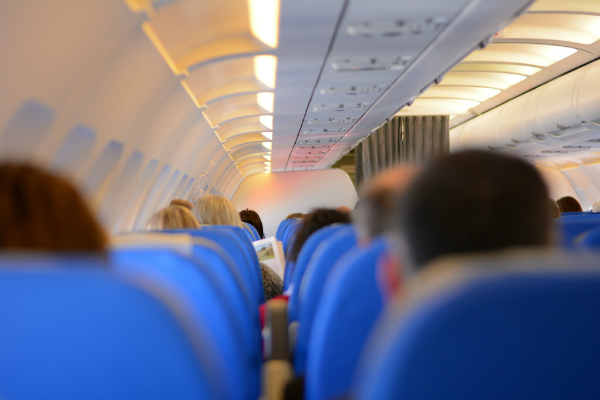 Doors cannot be opened during the flight

But we can still give the all-clear: It is very unlikely that such a situation will arise due to the willful opening of aircraft doors by confused passengers. Aircraft doors cannot easily be opened in flight. "Basically, it's physically impossible," explains aviation blogger Jason Rabinowitz. "At traveling altitude, the pressure difference between the outside and inside pressure creates a situation in which the doors cannot be opened at all." At an altitude of 10,000 meters, outside of the aircraft, there is only a fifth of the ground air pressure, which is why the doors are pressed outwards with great pressure would. However, if you want to open aircraft doors, you have to pull them inwards first. Due to the shape of the frame, the doors cannot simply be pushed open. The aircraft door is also stressed by the air flow on the outside of the fuselage. Overall, a force of well over a ton acts on the door of an aircraft at cruising altitude. In short: even the strongest man in the world would be powerless against it.