It is a depressing situation: living in another country and knowing that you will never be able to return home. A person affected and a pastor report. 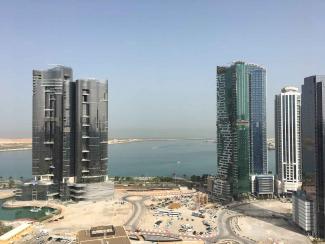 Dubai and the United Arab Emirates have made a name for themselves for superlatives. In the cities, the skyscrapers glitter, malls lure with attractions such as ice skating or skiing - this attracts tourists from all over the world. But there is also poverty and misery in the desert states.

Moritz Drucker is a Protestant pastor. He meets and speaks regularly with people who are rarely the focus of reporting: German-speaking expats who struggle with problems.

Mr. M. came to the United Arab Emirates a few years ago. The German set up a company in Ras al Khaiman. This went very well for many years and the company flourished. However, due to the tense economic situation, sales continued to decline. Mr M. took out a loan and overdrawn his credit card, which was not a problem at first because he could prove a good income.

But then suddenly Mr. M. was no longer able to repay the rent for his house and the installment for his loan. Debt is a criminal offense in the Emirates and a prison sentence is imposed if a loan cannot be repaid. The bank reported to the police that Mr. M. could not repay his loan. As a result, an exit ban was imposed and Mr M. is no longer allowed to leave the country.

Mr. M. still has a few friends who will give him a little money. With it he can afford a tiny room with air conditioning and buy food. But of course the question arises as to how long he will still find friends who will support him financially. He lacks tens of thousands of euros to pay off the debt. How things will go on for Mr. M. is uncertain. The ex-wife and two children live in Germany. But whether they will pay for the debt is open.

"At some point the residence permit will expire, then Mr. M. will no longer be able to identify himself and will sink deeper and deeper," said Pastor Drucker, describing the danger. Then it could well be that Mr. M. becomes a homeless person and has to live on the street - at temperatures well over 40 degrees.

Loneliness of the people in the Emirates

"I've seen people feed on the sugar sachets that they dust off for free at Starbucks," says Pastor Drucker. Again and again he visits older people who are no longer allowed to leave the country because they have debts and can no longer identify themselves.

Shame, difficult family relationships or conflicts often lead to people in Dubai becoming lonely. The expat community is also not very stable - most come to work in the Emirates for three to a maximum of five years and then return to their homeland. Making deeper friendships remains difficult. The Emirates are a very important economic partner for Germany in particular: Germany does not export more goods and services to any country in the region. Around 800 German companies have branches in the Emirates.

Most tourists who come to the country perceive the Emirates as a dazzling world full of promises and offers. The Emirates rely on mass tourism. In 2017, according to the local Chamber of Commerce, Dubai was ranked 26th out of a total of 185 countries in which tourism generates a significant part of the gross domestic product.

In fact, there is hardly a place where so many superlatives can be found: the tallest building in the world, the world's largest mall with a ski slope, ice rink and aquarium. Five-star hotels with pool landscapes and exquisite food for the price of a package tour. Exotic trips to oases and the desert. Outstanding museums like the Louvre Abu Dhabi.

The Evangelical Church in the United Arab Emirates (UAE) is an important point of contact for employees as well as tourists. Pastor Drucker is often called when a German-speaking tourist ends up in custody. This is a shock for many - because then they sit together with around twenty people in a large room with bars. The prisons are relatively well equipped in relation to this. The pastor then often tries to get in touch with them at home, speaks to the authorities, the judge or lawyers.

Many tourists underestimate the restrictive jurisdiction in the Emirates. "You quickly come into conflict with the law here on matters that are legal in Germany," explains Pastor Drucker. Anyone who photographs a government building or a military facility can expect high prison sentences. Some medications that are prescribed by a doctor in Germany are also considered drugs in the Emirates. Unmarried women who are pregnant also have a problem. Pastor Drucker knows a young woman who gave birth to her child in the Emirates, but was not issued a birth certificate because she is not married. This woman can leave the country herself, but her child is considered stateless - and would have to stay in the Emirates. 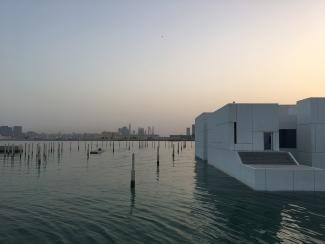 The Louvre in Abu Dhabi is in a spectacular location right on the beach. The white beach was built on for the museum - very close to the turtle beaches.

Climate change and environmental protection in the Emirates

In recent years, the Emirates seem to want to bring mass tourism with all their might - as one of the strategies to equip the country for the future if the oil source dries up. But the superlative tourist offers have their price for the country. The mangrove forests on the coast have now shrunk to a small nature reserve. The turtles, which only swim to the beach in Abu Dhabi to lay their eggs around every thirty years, can no longer return to their traditional place because there are now high-rise buildings there.

The dolphins and fish that can currently be seen on the northern coast are on the decline as increasingly larger tourist boats plow through the sea. The beaches are becoming too salty because the desalination plants have to produce ever larger quantities of drinking water ever faster.

"The Emirates are committing the same mistake that we made in Tunisia forty years ago: They are trying to establish mass tourism in order to achieve maximum sales. But this calculation will not work," says a Tunisian businessman who does not publish his name want to know. In his opinion, the country should focus more on high quality and luxury offers. "Instead, the Emirates are destroying the few natural treasures they have and spending all of the oil money building houses that no one will live in."

Resource consumption in the Emirates is high

The consumption of resources in the Emirates is enormous, as can be seen from the Global Footprint Network database - the ecological footprint is more than three times the capacity of the country. The Emirates import around 56 million cubic meters of natural gas from Qatar every day for the air conditioning and desalination systems. In order to cope with the increasing expenditure, the "Opec +" states decided to increase oil production only in June 2018 - they want to produce a total of one million barrels more per day than before.

After all, there are now some initiatives that are designed to protect the environment and promote alternative energies. For example, a thermal recycling plant is to be built in Dubai, which will process 1.8 million tons of waste annually and generate energy for 120,000 households. An international organization for renewable energies (IRENA) is also currently being set up, which is financially supported by the federal government and Abu Dhabi.

The Emirates are also betting on real estate. All over the desert, entire villages with new buildings are emerging - but on closer inspection they are mostly empty. Every Emirati gets a piece of land from the "Ruler" as well as a financial grant if he builds a house, says a taxi driver. The families take advantage of the offer - regardless of whether the houses are actually inhabited. In every village there is a magnificently decorated mosque. But there is a lack of infrastructure, so families prefer to live in larger cities such as Sharjah, Abu Dhabi or Dubai. The workers live in the huge residential silos, which are also in the middle of the desert: high-rise buildings with barred windows from which the laundry hangs and a hot wind blows the sand through the canyons. 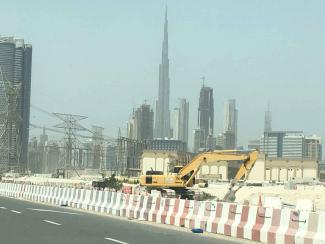 Real estate boom in Dubai: Buildings are being made everywhere. Sheikh Mohammed bin Rashid al Maktoum wants to transform Dubai into an international financial and technology center and a top address for tourism.

Heat and wind are troubling people in Dubai

The heat in particular causes problems for people. In summer, temperatures rise to more than forty degrees during the day, and even at night they rarely drop below thirty degrees. Anyone who has to stay outside is roasted by the sun. The meager wage workers who are carted in buses from the remote skyscrapers to the cities early in the morning and late in the evening try to protect themselves against the heat as much as possible. They wrap their heads in handkerchiefs, they wear gloves on their hands, only their dark eyes flash out of the human bundles of cloth.

While hotel guests swim in the swimming pool or enjoy an ice-cold drink at the bar, wage workers dangle for hours on windy strings from the skyscrapers to clean windows, or they carry heavy stones and install windows on the new buildings that are being built everywhere.

For Pastor Moritz Drucker, life abroad is still a gift: "We are learning to appreciate some things more at home. I notice that I have become more Bavarian. I miss the green, the mountains, the rain - and the white sausage" says the pastor. He doesn't want to miss the experiences he's had in the Emirates. And the services in the desert. 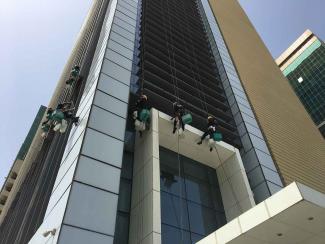 Window cleaners and construction workers in Dubai often have to work outdoors at over 40 degrees Celsius.

Expat enjoy the luxury and the desert

A high wage, a life of luxury with a house, pool and servants, as well as a wide range of leisure activities - these factors make the appeal for many people who come to the Emirates for several years to work here. Anyone who spends a night in the desert under the open sky and pats the soft nose of a camel knows the fascination that the country has on tourists and guest workers who flock here from all parts of the world.

Those who earn enough money can enjoy a wonderful life here. For most expats, as the guest workers are called here, life is well-ordered and in a relatively closed space. "We live in a world of our own," admits Pastor Drucker.

Friendships with the simple workers from India, Pakistan or Asia who work in the Emirates are rather unlikely. Contact with Emiratis is also seldom successful. In any case, they only make up eight percent of the population and generally live very isolated from the rest of society.

On the other hand, friendships are formed more often among foreign guests - between Spaniards, Germans, New Zealanders or Americans. The children get to know a completely different environment through international schools. 15 to 20 different nationalities meet in a school class. And yet the longing for one's own homeland is particularly great: In the Emirates, for example, there are several clubs for Germans - a club for BVB fans as well as coffee parties.

Start the week with our newsletter.