Why do pimples only appear on the face

Blackheads on the nose, pimples on the chin: more and more adults, especially women, suffer from so-called late acne. Why is that, what helps against it. Even those who have long since passed puberty are not immune to acne - sometimes the changed skin appearance only shows up after the age of 30.

As a teenager, you suffer enough when the hormones cause pimples and blackheads to sprout. But adults have recently had the problem more and more often, experts call the phenomenon late acne. "More and more people complain of blemished skin," says Prof. Thomas Dirschka from the Federal Association of German Dermatologists. Elena Helfenbein, beauty expert at the VKE Cosmetics Association, confirms: "Every fourth woman between 25 and 45 struggles with late acne."

Overactive sebum glands are the cause of pimples

The causes are manifold. The linchpin of adult acne are the sebum glands, which are increasingly active, explains Prof. Philipp Babilas from the Regensburg Skin Center. The higher the activity, the more prominent the pores and the more oily the skin. When the sebum glands become clogged, blackheads form - even after puberty. One of the reasons for this is that some people simply have the genetic predisposition, says Babilas, who is also a member of the professional association of German dermatologists.

Another cause, especially in women: the hormones. An imbalance in the sex hormones - in women, too much of the male sex hormones - can cause the pores to clog faster. After hormonal changes, such as stopping the pill or giving birth, women more often discover that their skin is also changing as a result.

Does the birth control pill cause acne?

According to Dirschka, the fact that women are mainly affected, and also those who never had skin problems as teenagers, is related to taking birth control pills. Their hormonal effects prevent pores from clogging and becoming inflamed. When the drug is stopped, there is an excess of male hormones, to which the hair follicles in the skin are sensitive.

What influence does diet have on the complexion?

However, it is not only genetic predisposition and hormonal world that have an impact on the complexion. Diet can also make itself felt. It has been found that foods with a high glycemic index have an impact on the skin, explains Barbara Fehrenbach from the Federal Association of German Cosmeticians (BDK). This also affects sebum production when the blood sugar level goes up. In this context, she advises you to be moderate in foods rich in sugar and carbohydrates as well as saturated fatty acids.

According to Babilas, dairy products can also aggravate unclean skin, because the proteins in them promote inflammation. The same applies here: Consume animal proteins in moderation. Vegetable proteins, on the other hand, are not a problem. It is good to drink a lot of water, adds Emel Bütün from the Hamburg Vocational School for Cosmetics (HBK).

The skin is not only the mirror of the soul, but of the entire inner life. "If the intestinal flora is unbalanced, for example due to the intake of antibiotics or an unbalanced diet, the skin can also bloom," says Renate Donath from the Federal Association of German Cosmeticians. A bumpy digestion shows up on the face, because the excretion also runs over the skin.

Fat creams and stress also cause pimples
"Very rich night or anti-aging creams can also be a cause," warns Dirschka. A beautician should take a close look at the skin in the truest sense of the word. "She recognizes the causes and can recommend appropriate care." Inflammation belongs in the hands of a doctor because it can be a symptom of another skin disease. But women also complain of blemished skin who have never taken the pill, eat healthily and do not use oily creams. They should take a closer look at their lifestyle: Stress increases the production of male hormones and stress hormones that stimulate the sebum glands.

What helps against late acne:

Liposomal lotions
In the case of non-inflammatory acne, regular cleansing by the beautician and care with a so-called liposomal lotion help.

Azelaic acid
For mild to moderate acne, which most women suffer from, azelaic acid, which is offered as a cream or gel, has proven itself.

Retinoid
For moderate acne, the doctor also uses creams with the vitamin A acid derivative retinoid. It is often combined with a cream that contains benzoyl peroxide as a light antibiotic.

Antibiotic and Vitamin A Acid Creams

If pustules and nodules appear, the dermatologist will also prescribe an oral antibiotic. "It is low-dose and reduces the degree of inflammation," explains Dirschka. This is how you get the acne under control and then continue working with the vitamin A acid cream.

And last but not least, poor care can be reflected. Bütün, for example, advises against products containing mineral oil. And some acne remedies don't necessarily work as expected: They are very aggressive and dry out the skin a lot. Then the skin has too little sebum and produces even more, says Fehrenbach. She recommends using light creams and mild washing gels with as few chemical additives as possible. Bütün would also rely on care that is based on moisture. It is important to clean the face not only in the evening, but also in the morning.

Frischepost delivers fresh groceries from small farms and manufacturers in the Berlin-Brandenburg region directly to your home or workplace. more 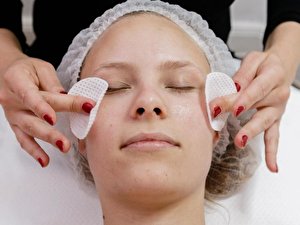 Whether facial, massage or eyelash extensions, a cosmetic studio is the right address for wellness and beauty for face and body. more

more on the subject

Wellness and relaxation for all the senses

Whether a visit to a thermal bath or restaurant, a wellness treatment or an overnight stay in a hotel - with the Spreewald Therme voucher you decide on your individual wellness package. Order online now! more

Appearance is an important feel-good factor: addresses for everything to do with beauty in Berlin, from hairdressers to waxing studios. more

The most important food and nutrition fairs in Berlin with dates, descriptions and directions. more