What is Giacomo Puccini famous for

Giacomo Puccini came from a family of musicians. The last four generations of his family had dedicated their lives to music, both on the maternal and on the paternal side. His father Michele Puccini, whom he lost at the age of 5, was the conductor of the Lucca town band, organist at the cathedral and composer of operas and masses, his grandfather Domenico Puccini also a composer of orchestral works and piano pieces. In keeping with family tradition, Puccini became a singer (1868), organist (1872) and also active as a precocious composer. In 1874 he accepted the Pacini Institute for Music in Lucca and two years later he wrote the prelude for the local orchestra. At the age of 14 he was already able to support himself. He had a permanent position as a church organist and choirmaster in Lucca Cathedral. During this time he wrote some works that are less well known today, including: the cantata, "I figli d'Italia bella", 1877; a "mottetto" ("Mottettto per San Paolino", 1877) and a "messa" (1880).

With the support of his uncle and a scholarship, he studied at the Milan Conservatory for three years from 1880 and, although his uncle described him as a "poor and undisciplined" student, he achieved the best results. He was tutored by Carlo Angeloni, who was himself a student of Michele Puccini and who shared his love for opera with him. In Milan, Puccini came into contact with many important artists of the time and became a member of the "Scapigliatura" movement (group of intellectual aesthetes, also known as the "Gli scapigliati di Milano"). This is how the successful career of Giacomo Puccini, who composed many of the world's most famous operas, began.

On May 31, 1884 he made his debut at the Teatro Dal Verme in Milan with his first opera "Le Villi", for which he earned great success with audiences and critics. After a long history of creation, he presents his first opera, "Edgar", in the theater "La Scala" - in 1889 before, but she had little success. 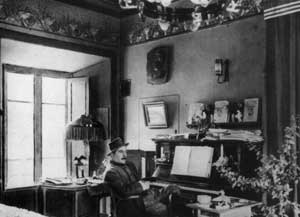 With the support of his editor, however, he does not lose his faith in the "big breakthrough". While thinking about new characters, he starts moving to Torre del Lago. He retired to his house near Viareggio to compose new music for the "libretto" (the story in an opera). Puccini loved the small village. He loved going hunting or indulging with his contemporaries. This is where the majority of his works, as well as his third opera and his first great success, "Manon Lescaut". The piece emerged from a remarkable collaboration with the librettists Luigi Illica and Giuseppe Giocosa, which he also used in his other compositions, his three best-known and most frequently performed works: "La Bohème" (1896), "Tosca" (1900) and "Madama Butterfly" (1904), supported. The premiere of his "Madama Butterfly" February 17, 1904 was initially an extraordinary failure. Only after the revision was the opera performed again three months later at the Teatro Grande in Brescia and has now been received with great enthusiasm.

In the meantime he started a family and lived with Elvira Bonturi. On December 23, 1886, their son Antonio was born and the two married in 1904.

The next few years are based on many works that were performed in the Metropolitan in New York (including “La fanciulla del West” in 1910), as well as collaborations with new authors.

From 1919 to 1922 he stayed in the municipality of Orbetello, in southern Maremma, Tuscany, where he bought and permanently lived an old observation tower on the Tagliata beach, now called Torre Puccini, from the time of Spanish rule. Here, just a few meters from the Tyrrhenian Sea, he devoted himself to composing his last opera Turandot.

Since 1923 he suffered from throat cancer. But despite the serious illness he worked hard on his last great work, the "Turandot". Before the final touch-ups and the first performance, Puccini goes to Brussels to have his neck operated on. He died on November 29, 1924.

The villa near Torre del Lago, in which Puccini spent a long time composing, especially in his last years, now houses a museum, the "Villa Museo Puccini". It is a breathtaking environment in the midst of unspoiled nature near the sea, which was used by Puccini to retreat into solitude. Puccini and his wife and son, who later died, are buried in the villa's chapel. Today the house belongs to his great-granddaughter, Simonetta Puccini, and is open to the public all year round.