What actors raised the Batman character

There will only be posts in the category Batman displayed.

After rubbing my suggestions for improvement for the conclusion of "The Dark Knight" trilogy under the nose of Christopher Nolan, who is certainly following this blog with great suspense, I will now go back to it.

Don't worry, I'm not going to do all three of Nolan's Batman pieces. But "The Dark Knight" has to be easy. How so? It is actually obvious.

As I write these lines, I think of a hint from days gone by. I see myself sitting in the car with some loose sheets of paper on my lap. It was the original script (of course not originally written by the Nolan brothers, but printed out themselves) of "The Dark Knight". I think I had a doctor's appointment or something and had to bridge some waiting time. So I just read through part of the script. Nerdy.

Anyway, that scene came to mind when I thought of "The Dark Knight" and a red pencil. At least that shows how mad I was - and still am - this movie. Who prints out the script of a film?

To get back to the actual topic: The red pencil has little, no, actually nothing to do with this film. "The Dark Knight" is, in my humble opinion, the best example of an all-round perfect feature film. 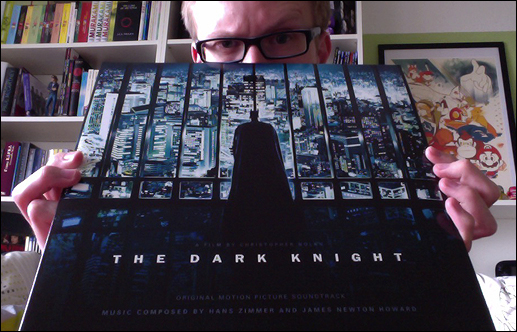 Script, direction, actor, acting, cinematography, pacing, action, character development, main and subplots - everything to the point and perfect. Even the soundtrack is outstanding, after all, then as now, I kept listening to it up and down.
... and meanwhile also on record.

Note that this film not only took the weight of the shame of the Joel Schumacher films off Batman's shoulders, but that TDK redefined the superhero film genre. Both comic fans and complete amateurs can see this film without making any compromises.

The plot, like the characters themselves, has a certain depth, carried by a morality typical of Nolan, which was simply new for a superhero film. Batman was transplanted into reality and you noticed: Hey, that works! And not least thanks to Heath Ledger's performance as a joker. He wears this film and almost single-handedly raised it to cult status.
By the way, I'm very, very sure that TDK would have been a big box-office hit too, if Heath Ledger hadn't timed out so early. He would also have received the Academy Award during his lifetime for this iconic role that made viewers forget Jack Nicholson's portrayal of the Joker for the first time (keyword »posthumous bonus«, nonsense!)

For me, “The Dark Knight” is and remains both a superhero film and a super or just a hero film. So far unmatched in this genre. In this respect, there is only one final question regarding the red pencil: "How about a Magic Trick?"