Trauma over generations.
The actress & Hollywood diva Joan Crawford († 1977) and her children


Joan Crawford, actress and Hollywood diva with a versatile image, received three Oscars in her lifetime for her film performances.
She was born as Lucille LeSueur between 1904 and 1908 and died in 1977.
Lucille was born the youngest of three children. The sister died very young.
The father left the family shortly after Lucille was born.
The mother Anna married a new man, the then stepfather of Lucille and Hal. That relationship ended and Anna was a single parent with her son Hal and daughter.
The mother preferred the brother Hal. There was emotional neglect and poverty.

Lucille works his way up and out of these formative relationships.
It made its breakthrough from the mid-1920s. Lucille adopts the artist name Joan Crawford. In 1939 she took on a baby whom she first named Joan and then Christina and adopted in 1940. This is followed by her son Christopher (called Chris, born 1943) and the girls born in 1947, whom she calls Cynthia (Cindy) and Cathy.

There is physical and psychological violence early on, a lot of housework, rigid rules and punishments for the oldest children.
All children are put in boarding schools, (monastery) schools, etc.
Christina Crawford describes how her mother almost killed her in a fit of anger, which was only prevented by the secretary's intervention.
The mother had outbursts of anger, various men, alcohol addiction and takes pills, the staff changes at a fast pace ...

Once, out of anger, the mother cuts up her daughter's favorite dress and
it has to carry this cut up in tatters in front of other people for days.
There is money, but the children are mostly kept short.

Everything Christina does is wrong, flawed. Your "I" starts to totter.
As a teenager, Christina developed depression, migraines and later a tumor
and suicidal thoughts. Sometimes she hardly has a pair of shoes.
The mother exercises strict control over the children even from a distance.
The boarding school management must then implement the imposed penalties.
When she was 12 and had a liason with a boy,
Christina is called a "whore" by her mother.

The siblings have little contact with each other, they are made by the mother
played off against each other.
Outwardly: an ideal world, TV programs about the "great" Christmas parties, etc.
The youngest are the "good" children, the oldest are the "bad" children.

Christina first becomes an actress like her mother, there is symbiosis and competition with her mother.
Times are changeable for Christina: sometimes they are good, but then there are again "out of the blue" malicious attacks by her mother Joan Crawford.

Joan Crawford dies on May 10, 1977. Surprisingly in the will for Christina:
She and her brother Chris are expressly excluded from the line of succession.
Joan Crawford's addition is particularly infamous: "For reasons known to you" (Original: "It is my intention to make no provision in for my son Christopher or my daughter Christina for reasons which are well known to them."). No further information on this.
The younger sisters Cindy and Cathy inherit something, but not much.
Most of the fortune (around $ 1 million) goes to charities;
small sums still to certain people.

Christina wrote the book "Mommie Dearest", which appeared in 1978 and was made into a film in 1981. A wave of outrage swept across the United States; but it also started a discussion on violence in families.
Christina is assumed that she wants revenge because of the will, etc.
She is committed to combating violence in families.
Christina had three marriages and no children of her own.

The brother Chris basically confirmed the statements in the book "Mommie Dearest".
Presumably he was severely traumatized. He has experienced bad things: for example, he was buckled up in bed at night, had to scrub the floors in the house at night as an eight-year-old on his knees, etc.
Even as an adult, he experienced his mother's rejection - pure cruelty.
He broke off contact with her when she called his child a "bastard".
When Joan Crawford died, she had not seen her son Christopher in 19 years.
Christopher had two marriages and died on 09/22/2006.

The four children remained divided into camps all their lives.
Cathy and Christina are still alive today.
The discussions continue to the present day as to how much truth there may be in the book.
Christina's therapists assume that her mother, Joan Crawford, had a narcissistic, manic-depressive, sociopathic and borderline personality ("psychiatrists have said to me she was narcisstistic, a manic-depressive, a sociopath and borderline."; Cf. People Magazine, May 6, 1998).

The younger sisters experienced their time with their mother very differently.
Cynthia (Cindy) died in 2007.
Cathy LaLonde tries to this day to maintain a good image of her mother. She does not accept that her older sister Christina or her brother Christopher experienced atrocities with their mother.
The grandson Casey LaLonde (born March 16, 1972) admits that Joan Crawford had an obsessive-compulsive disorder because of her obsession with cleanliness and order. (See.)

There is hardly any literature in German about Joan Crawford herself;
even in English a few new works have only just appeared. 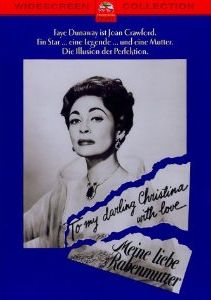 "I went down the steps to the garden
and stopped. From here I had
watched the rising of the evening star,
this star had my secret
Entrusted to wishes. I wished for a
Horse. And the strength to stay alive
Until I was grown up and for myself
could care. Most of all, I had one
Mother wanted. A mother who is me
really loved. "