Light-emitting diodes convert electrical energy into light. They work like semiconductor diodes that generate light in the forward direction. The abbreviation LED is the abbreviation for "Light Emitting Diode", which means "light emitting diode" in German. They are used as signal and light transmitters in different areas.

Light-emitting diodes are available in different colors, sizes and designs. The most common designs have a 3 mm or 5 mm diameter. Then there are jumbo LEDs and mini LEDs up to SMD size.

A light-emitting diode switches very quickly from the illuminated to the non-illuminated state. The light beam can be clocked up to the MHz range. However, this is only visible to the human eye as luminous pulp. The brightness of the LED is then lower than it should be with the set current.
The lifespan is an incredible 106 Hours. This is very long compared to normal lamps. 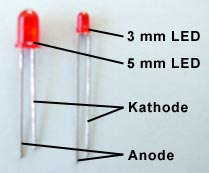 Beware of incorrect polarity! Light-emitting diodes can only tolerate a very low reverse voltage. They can be destroyed with low blocking voltages of 5 to 6 V.

Depending on the color, the LED is made up of different mixed crystals:

There are two different ways to create white light with LEDs.

One way is to mix red, green and blue LEDs together. This creates a white light with an adjustable color space. In this form, three light-emitting diodes are combined in a common housing. You can recognize these housings by the six connections that are attached to the LED chip in a star shape. The color temperature and even the color can be set very finely.
The generation of white light with light-emitting diodes of different colors is the most expensive method.

The second option is UV light-emitting diodes or blue LEDs with the semiconductor material indium gallium nitride (InGaN), the housing of which is coated with various phosphors. With a blue LED that would be a yellow phosphor layer. This layer acts as a filter for the blue photons, which are emitted as yellow light. The blue and yellow light mix into a white light. These LEDs are called white diodes.
Other high-power LEDs are made from aluminum gallium indium phosphide (AlGaInP). They shine with a wavelength of 610 or 615 nm. Their color is more orange-yellow. It is warmer than that of blue LEDs.
The color temperature is determined during manufacture. Nothing can be changed afterwards. These pseudo-white LEDs are available with warm, neutral and cold white light with color temperatures between 2,500 and 10,000 Kelvin.

How an LED works

A light-emitting diode consists of an n-conducting basic semiconductor. A very thin p-conducting semiconductor layer with a large hole density is applied to it. As with the normal diode, the boundary layer is flooded with free charge carriers. The electrons recombine with the holes. The electrons release their energy in the form of a flash of light. Since the p-layer is very thin, the light can escape. Light emission is perceptible even at low currents. The light intensity increases proportionally with the current intensity.
Since only a small amount of light emanates from the semiconductor crystal, the metal under the crystal is hemispherical. This diffuses the light. The lens-shaped housing bundles the light. Light-emitting diodes can shine very brightly with just a few milliamps of current.

Standard light-emitting diodes have a diameter of 5 mm. They are the most commonly used light-emitting diodes in electronic circuits. They start to glow at 8 to 12 mA. If you increase the current, they shine brighter. The maximum luminosity is reached at 20 mA. The difference to 15 mA is only minimal. Usually a current of 10 mA is already sufficient to make them glow sufficiently.

Low-current light-emitting diodes have a diameter of 3 or 5 mm. They light up at 2 mA with up to 5 mcd. If you increase the current, they shine brighter. The maximum luminosity is reached at 20 mA.
Low-current LEDs have the property that they still light up at 2 mA, which standard LEDs do not. They stop lighting up at 8 to 10 mA (depending on the manufacturer).
Low-current does not mean that an LED lights up as brightly at 2 mA as it does at 20mA, but that this LED can be operated up to 2 mA and at least lights up weakly.

The light-emitting diode in use

The forward current IF.that flows through the light-emitting diode. When determining the resistance, the respective forward voltage UF. must be taken into account.

The formula calculates the series resistance R.V. over the total voltage Utotal minus the forward voltage UF. by the forward current I.F..
A light-emitting diode already burns at a fraction of the maximum forward current. In addition, light-emitting diodes do not necessarily have to shine with their full luminosity. Usually just a few mA are enough to generate sufficient brightness.

The exact calculation method with circuit, explanation and other formulas can be read under series resistor for an LED. If you need the result faster, you can use the LED series resistor calculator.

Why is a series resistor required?

Regardless of whether certain operating constellations also work without a series resistor, the current is ideally limited with a constant current source. Since an LED is a current-dependent semiconductor, the easiest way to do this is with a series resistor that limits the current to the value specified by the manufacturer (usually 20 mA). As a rule, a smaller current will do the job (e.g. 10 to 15 mA). The greater the current, the brighter the LED lights up. 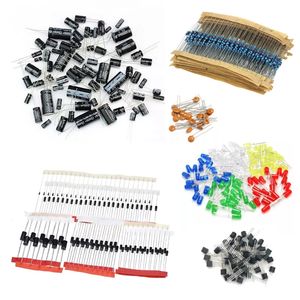 What every electronics technician needs: An electronics range with over 1,300 electronic components so that you have everything you need for every application.

Electronics simple and easy to understand

The electronics primer is a book about the basics of electronics, components, circuit technology and digital technology.