How does space travel affect food?

Space food for barley: how to feast on the ISS

When Alexander Gerst will fly to the International Space Station ISS for the second time in June, he can look forward to some culinary highlights. Then there is also Kässpätzle, Maultaschen and oven slip with plums instead of the usual astronaut food. The dishes are part of the bonus food, which is specially prepared for each astronaut. 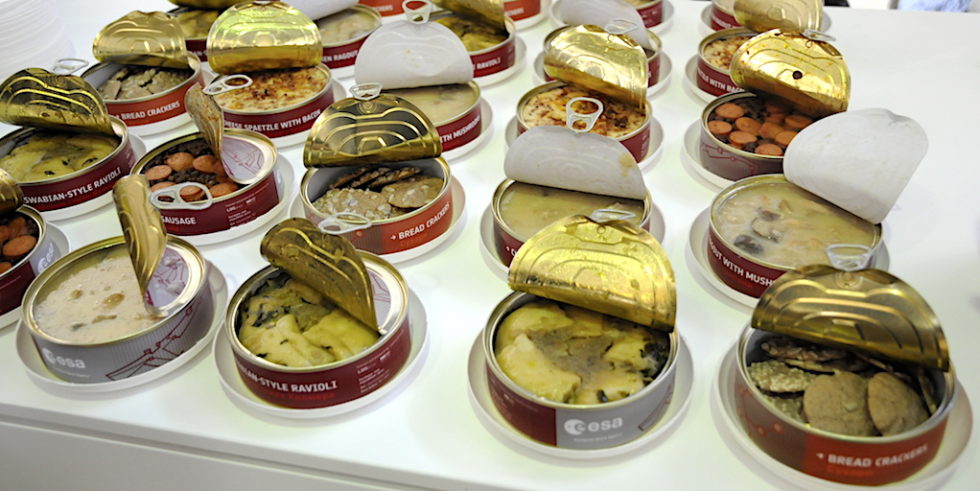 Astronaut food from a can: In the LSG Group's laboratories, Alexander Gerst's favorite dishes were prepared in a space-friendly manner.

The special dishes make up about 10-20 percent of what the astronauts eat at an altitude of 400 km on the ISS. Usually they choose their daily meal from 16 menus in a standard food catalog provided by the Russians and Americans. Three quarters of a year before the flight, you have to decide how much of this or that dish you want to take with you.

Then there are the tailor-made dishes for which the astronauts can express their wishes and which they also try before the flight. With Alexander Gerst's selection, it becomes clear where his home is. Kässpätzle with bacon, lentils and spaetzle with sausages, dumplings with spinach, sliced ​​chicken and cream with mushrooms and an oven slice with plums as dessert are ordered. The Swabian cuisine goes well with Gerst, which was shaped by culinary delights in Künzelsau in Baden-Württemberg.

The food suitable for space was developed and elaborately cooked in the laboratories of the LSG Group. The company is one of the largest providers of on-board catering and also has a catering subsidiary in Germany that supplies Lufthansa and Eurowings. Head chef Jörg Hofmann heads the “Culinary Excellence” department and has worked out the dishes for Gerst. The time frame of one year was tight, as nutritional and other requirements of the European space agency ESA had to be observed. Among other things, canned food, which is labeled in both English and Russian, must be stable for at least two years without refrigeration. The cans are heated in a kind of toaster and the dishes are then eaten with a knife and fork, just like on earth. The filter system catches crumbs or grains of rice that get lost and float freely.

The sense of taste changes at an altitude of 400 km

Another challenge is the astronauts' altered sense of taste. Chef Hofmann: “Our daily business is catering for airlines that serve food to passengers ten kilometers above the ground. The changed pressure and a different humidity already have an effect on the sense of taste at this level. This effect is much more pronounced at an altitude of 400 kilometers on the ISS. ”One of the reasons for this is a changed water balance in the body in weightlessness. But why the food tastes different than on earth has not yet been definitively clarified.

The dishes must therefore be seasoned more strongly, but with very sparing use of salt. Salt has a negative effect on bone metabolism, which in turn contradicts the medical goal that astronauts should lose as little muscle and bone mass as possible during their stay in space. The motto is therefore more spices, less salt. "Indian cuisine works very well in this regard," says Jörg Hofmann, and Gerst has also chosen an Indian dish: Indian butter chicken with basmati rice as a side dish.

"People from different countries meet on the ISS and you can tell your story through the food," says Jörg Hofmann, who already speculated at the space food presentation at the European Astronaut Center in Cologne on March 19 that the Maultaschen particularly well received by the crew. Because the bonus food was cooked for Alexander Gerst, but you can also invite each other to dinner on the ISS. Just remember last year's pizza party.

Calorie bomb with a lot of taste

As a test eater for ingenieur.de, the author of these lines was also able to convince herself that the dishes are really delicious. And extremely filling. After a can of spaetzle, a can of lentils and half a dessert, it had to fit. Although there were no calorie information on the labels, few were definitely not. The body simply uses more energy in space.

In July / August Lufthansa wants to offer space food to non-astronauts as well. If you take an intercontinental flight in business class during this time, you will be served one of the special dishes. Including a can as a memento.