What are the causes of the overlay

Harmonics or harmonics are waves whose frequencies are an integral multiple higher than those of the fundamental waves. They arise when the electrical voltage is distorted due to various influencing factors.

Voltage and current curve with harmonics: 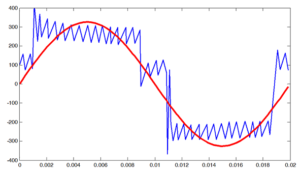 How do harmonics arise?

In the ideal case, the electrical voltage runs in a perfect sine curve, on which the polarity alternates evenly between positive and negative values. However, this uniform course is as good as impossible nowadays. The superposition of different sinusoidal waves can hardly be avoided due to different operating resources. The following triggers can be named as specific causes for harmonics:

These factors disrupt the linear current consumption, which creates harmonic currents. These cause a distortion of the sinusoidal voltage, which ultimately leads to harmonics.

Harmonics have been a known problem since the early days of electrical power distribution networks. At that time, they were mainly triggered by industrial mercury vapor rectifiers and were mainly noticeable through malfunctions in electrical machines or power lines. However, since the machines were designed much more conservatively at the time, the voltage distortions were kept within limits.

Correspondingly, in the last few years, when machines are being pushed further and further to their performance limits, a sharp increase in voltage distortion has been recorded. Added to this are the increased emissions and the reduction in the signal level of electrical devices, which make the devices even more sensitive to interference from the network. Accordingly, electrical devices are both emitters and receivers of interference, so that harmonics are becoming more and more important.

What effects can harmonics have?

Harmonics can have various effects on equipment. In addition to the functional impairment, this also includes the destruction of the affected devices. Depending on the device, different symptoms can be observed.

At a glance, harmonics can cause the following problems:

This list can be continued indefinitely and only includes some of the impairments caused by harmonics. In order to avoid such problems, it makes perfect sense to deal with the reduction of harmonics.

How do I minimize harmonics?

In order to avoid harmonics and the associated consequences, high demands must be made on the network quality. These are regulated in the standard EN 50160, which deals with the "characteristics of voltage in public electricity supply networks". The frequency, height and curve shape as well as the symmetry of the conductor voltages are specified in this standard and must be met by the network operator.

Not only network operators, but also consumers can influence the characteristics of harmonics in their own network by choosing their electrical and electronic devices. This is the only way to minimize pollution of your own network. In order to keep the harmonics in your own network as low as possible, devices should be used in accordance with the EN61000-3-2 standard and its classification. In class C in particular, low-quality power supplies are used for lighting purposes, which has a negative effect on the primary network and thus also on various other electrical devices. The limit values ​​specified in the EN61000-3-2 standard should therefore be strictly adhered to. Four different device classes are defined in this standard:

The Class C is of particular interest to consumers, as unsuitable power supplies are often used without hesitation in the lighting sector. The following LED power supplies comply with the standard and are suitable for installing safe LED lighting: 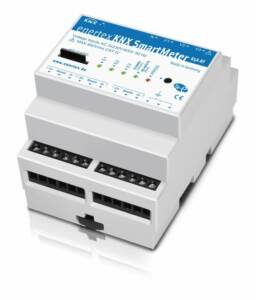 Taking into account the applicable standards, harmonics can be minimized as far as possible, which not only increases the service life of many devices, but also prevents them from being damaged or destroyed. Choosing high-quality devices is therefore essential for a clean network.

The ENERTEX 1149-85-RT SmartMeter is also used to precisely measure the harmonics in your own network. With the bidirectional counter of accuracy class 1, mains harmonics can be measured as precisely as possible.